A downloadable One Page RPG

Gather your crew, assemble your ship, and take to the depths of space on a mission to discover strange new worlds. To seek out life and new civilizations.

To Koboldly Go where no lizard has gone before!

This game requires a game runner to create challenges and stories and adjudicate rules interactions.

In order to download this One Page RPG you must purchase it at or above the minimum price of $5 USD. You will get access to the following files:

Posting my review here:
Just played a game of Koboldly Go! and it was utterly fantastic. The perfect game to read, setup, and play a satisfying scenario in one sitting. There are enough rules to sink your teeth into and foster cooperative play, but not so much you need to study before coming to the table. I especially enjoyed the mixed successes. They drove the story forward while always introducing the next problem for our kobold crew to deal with. Give this game a go!

Used this to run Halo 1 (roughly) from the Covenant's perspective and it fitted really well! We only had 3 players, so I'd be curious to try it with more, but it worked out and I'm glad I picked it up :)

I have rules questions (and not ones caused by us not knowing that v1.5 existed and switching rules half way through)!

When you get a complete success on repair, do you get +1 power and +1 dice, or just the power.

In the "Make it Go!" section you describe the shooting procedure as: "Roll 1 attack per power to the weapons bay against the power of the defending ship’s engine", however the 1.5 rolls aren't opposed, and the Engine Room just applies a -1 dice per power. Which procedure is right?

Is there a planning phase every round of space conflict?

How does the Communications Officer ability work? Does it mean that a 4+ on a Plan or Help roll give +2 dice instead of +1 dice, or does it mean you roll 2 extra dice when making Plan and Help rolls?

In combat, do enemies (NPCs) also roll to attack? The Blades-style resolution mechanism made us think that it was "one roll resolves both sides action", but the Dodge and NPC stats make it seem like you take turns.

In combat, does a Dodge get declared as your action? Do you choose to Dodge before knowing if you are being attacked? If you are attacked twice in a round, can you Dodge both, or just one?

In ship to ship combat, it says that the ship's weapons: "has a pool of dice equal to the amount of power. It then says: "Roll 1 attack per power to the weapons bay against the power of the defending ship’s engines." Does this mean that attacking doesn't use a kobold's own ratings, but uses just that attack pool (which is decreased by the target's engines)? Do you roll 1 attack per power, each of one dice, or 1 attack per power each equal to the power? What does it mean to roll "against the power of the defending ship's engines"? Since 1.5 rolls aren't opposed — so this reads like a holdover from the previous rules? The more I re-read these rules, the less I understand them :)

Does a scan with the Sensor Array reveal both the structure of an enemy ship and the crew position, or just one or the other? Does it reveal the nature of every room, or just some? Does that vary on a partial or complete success?

I wanted to let you know that I’ve seen your questions and hope to have answers for them soon. Thanks for your patience.

Thanks. We are playing again tonight, so I guess for now we'll just have to stick with the answers we made up ourselves last time.

Good news! I'm actually working on the response right now, and will respond to your original post when I finish.

First, for the sake of clarity, the Koboldly Go! file is the most recent version; if it's got the art and not the watermark, it's the revised version. I did not do a great job making that clear, and that's on me. Apologies.

Another aside before we begin, while it's definitely possible to imagine the players as the only Kobolds on the ship, that was not my intent; the players are the Spock, Kirk, and Uhura, but there are still dozens of other kobolds running around working on and maintaining the ship or causing minor havoc. That said, if you want to imagine them as Han and Chewie, go for it.

Now to your questions, in order:
General:

Thank you for your detailed questions! I hope this helped resolve the confusion.

Thank you very much for your comprehensive replies! I think you've cleared up a lot of the confusion I had over ship combat and the way the weapons systems work.

For dodges it sounds like we might need to hosue rule it a little until you have your revisions done.

I'm playing a Comm Officer, so I'll let you know how the bonus feels after our next session.

Koboldly Go! is a one page rpg (or two pages if you don't print one on the back of the other) about kobolds in space.

It is delightfully crunchy, but also easy to play and it packs a ton of design into its short page-space.

It's got a system for building a ship from a deck of cards, it's got cool abilities and custom classes (including a redshirt whose mechanic is that they die frequently but always come back,) it's got an FTL-style room-powering system, and there's flavorful stats and multiple phases to combat that allow you to plan, give orders, and act each round.

It may not be a good first game for folks who haven't played trpgs before, as its rules take a little interpretation in a few places, but it has an extremely fun structure, and if you're familiar with 5e and want to see what kinds of cool things other game systems can do with crunch, buy this.

Alternately, if you want to play Star Trek but as a bunch of hectic screaming lizards, you should also buy a copy.

-How do you determine reactor size?

-Under Make It Go!, attacks are implied to use d20s. Likewise as part of the captain's ability. However under Beam Me Down!, everything is said to use d6 pools.

You are correct on both minor issues (Including what caused the second one) and I plan to correct them in a future edition.

All good! It's a super cool game, and it's not too hard to houserule the mechanics to resolve the issue.

Thank you! And thank you for your kind review. :)

What a quaint game I love it !! The ST & DND inspirations are apparent but I think you work them in your favour to create a slice of sci-fi that shapes itself to be cute and fun, especially for one-shots! I loveee the versatility you've added between the different ship jobs and the vessel, I feel it would help a lot to create different stories from the get-go. The fact that you have suggested personalities is also very helpful for those who may not have played RPGs before! Thank you :)

But my favourite part HAS to be the vessel creation, it's so interesting! Every time a deck of cards is worked into the game as a mechanic I immediately get excited, and it would be so fun to buy a cheap deck specifically for this game and just keep the final vessel map as a memento. I can already see my friends arguing about the next room they should get.

If anything the one-page limitation of this game is the worst part about it because I want to know all about these little guys!!! I love them !!!!! Thank you so much for the game <3 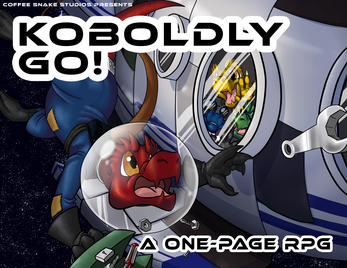